Stranger Things, a success story born out of data analytics

Stranger Things is a television-format series created by the Duffer Brothers. Series 1 was released as a Netflix original series on the 15th of July 2016 and became one of the most popular shows ever to be streamed (according to Parrot Analytics, a company specialising in capturing the TV content consumption and engagement of billions of fans around the world).

Season 3 launches on Netflix the 4th of July 2019 and you don’t have to be a data scientist to know that it will be a huge success. However, when the show started a few years ago, who would have predicted it would be such a winner? Well, Netflix did…

Read on to learn more about the future of television programming and how data analytics helps Netflix to predict successful movies and TV shows.

Most people realise that Netflix collects their data to personalise the customer experience and, more recently, provides consumers recommendations based on their interests. But, it goes much further than that. Indeed, Netflix does not decide to buy TV show licences like Stranger Things because they feel that subscribers “might” like it. It would be too risky to make such big decisions based only on a “persona” or “idea” of what their average customers like. When consumers pay upwards of £5.99 for a monthly subscription you cannot invest millions on a show if you are not completely sure that it has the potential to become a big hit. To ensure this happens, Netflix uses data analytics, data science and predictions to support its decision-makers throughout the acquisition process.

What type of data is Netflix collecting from its subscribers?

As of January 2019, Netflix had 139 million worldwide streaming subscribers. Having a large user-base allows Netflix to gather a huge amount of data. This data is what enables Netflix to compete within the cinema industry and it can be classified into 4 main areas:

Let’s say you’re a Netflix user and also a big fan of Stranger Things – Netflix captures the following information about your profile:

Now Netflix knows you, but they also want to know more about your customer experience within Netflix ecosystem and what your preferred touchpoints are. For instance:

Then, the next logical step is about your engagement with the brand and how you use their products and/or services. Below some examples of actions/activities currently tracked by Netflix: 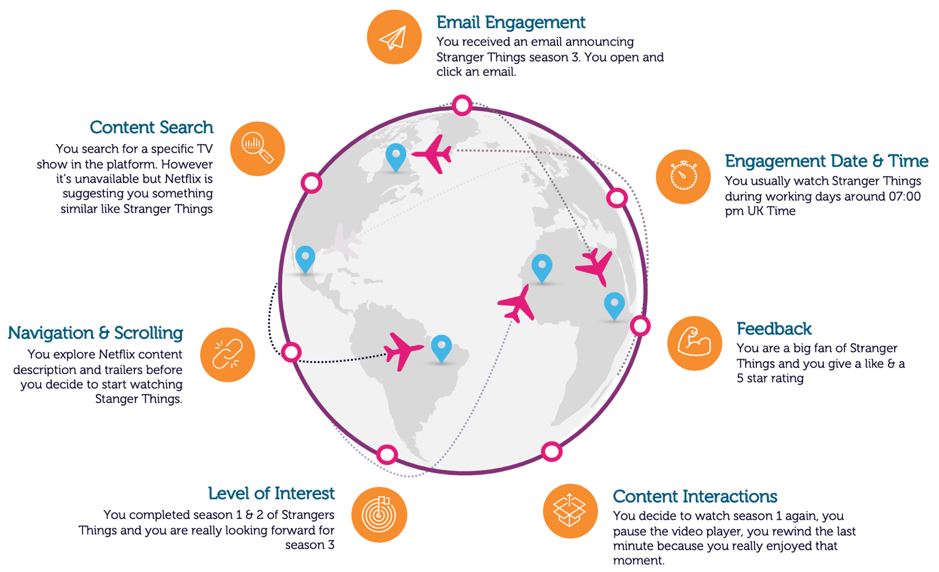 Almost there, now Netflix knows who you are, how to communicate with you and how you engage with them.

Finally, they want to know about your interests. For that purpose, Netflix has a product catalogue describing all Films and TV shows currently available on the platform and will associate them with a customer record to try to understand if some type of films or TV shows are redundant. The definition of each piece of content is complex and we could write a full article on it but for now, let’s focus on some examples of attributes being used for Stranger Things:

And here we are, Netflix knows pretty much everything about you and your interests. They can now map that data back to a single customer.

This is what we call a Single Customer View (SCV): 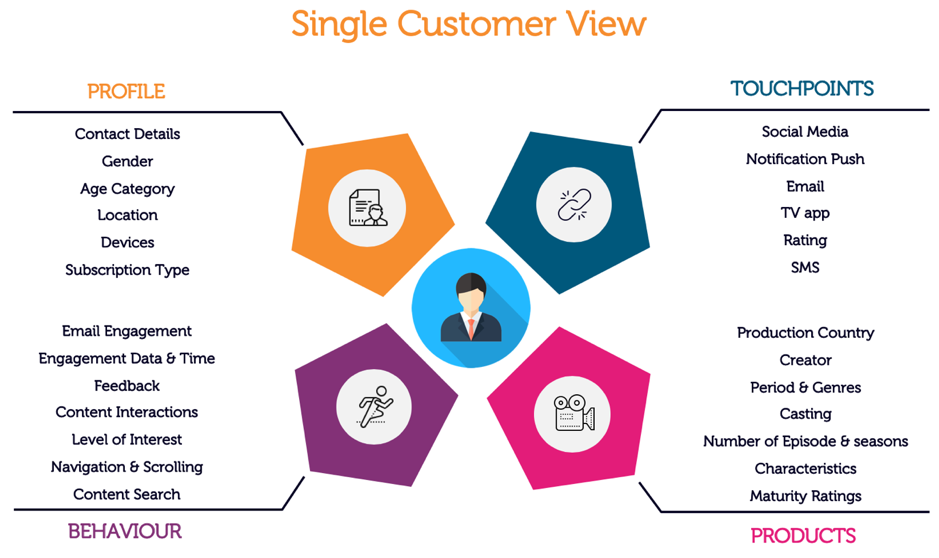 Once Netflix has a clear understanding of each customer, it becomes easier to personalise the customer experience inside or outside the platform. However, as mentioned earlier this is not the only benefit. They can also get from that data the value-added insights that drive key decisions about content acquisition.

Stay tuned for the next episode about Netflix and their customer insight, which you can read here.

Warning: Use of undefined constant DOV_VERSION - assumed 'DOV_VERSION' (this will throw an Error in a future version of PHP) in /home/customer/www/acrotrend.com/public_html/wp-content/plugins/divi-bars/includes/class.divi-bars.controller.php on line 65